What Does OG Mean?

OG means "Original Gangster" and "Original" when used in a social-media context. In a sporting context, OG means "Own Goal."

Here is more information about each of these definitions of OG. Examples of use can be found below.

When OG means "Original Gangster," it refers to a person who has been around for a long time (i.e., someone who might be considered "old school").

The phrase "Original Gangster" is thought to have originated in gang circles in Los Angeles (LA) in the 1970s, as a term of respect for senior gang members. It gained wider circulation in 1991, when rapper Ice-T released a successful album entitled "OG Original Gangster."

More recently, OG is used as a straightforward abbreviation of the word "Original." In this meaning, it is a term of appreciation or admiration that marks the originality of a person or a social-media post.

Also of interest, the LA rap group Cypress Hill is widely credited with inventing the name "OG Kush" (Original Kush) to refer to the Kush strain of cannabis.

In sport (particularly soccer), OG means "Own Goal." It refers to the defending team accidentally scoring in their own net.

Also of note, in military circles, the "Own Goal" meaning has been extended to refer to an adversary bomb-maker who is killed when his own bomb detonates prematurely.

When I write OG, I mean this: 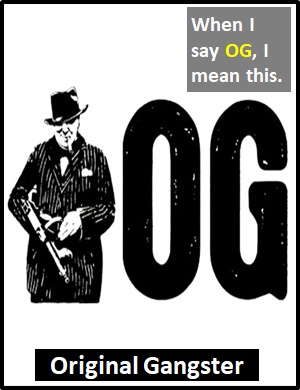 Examples of OG in Sentences

Here are examples of OG being used in conversations:

(Here, OG is being used with the meaning "Original Gangster.")

(Here, OG could be being used to mean either "Original Gangster" or "Original.")

An Academic Look at OG

Whether used with the meaning "Original Gangster" or "Own Goal," OG is classified as an initialism abbreviation, because it is pronounced using its individual letters (i.e., "Oh Gee") and its letters represent words. (Initialisms are different to acronyms, which are spoken like words.) When used to mean "Original," OG is classified as a contraction (much like ADR is a contraction of "address").

Example of OG Used in a Text