What Does KUSH Mean?

The word KUSH refers to a "High Grade Cannabis" which was traditionally cultivated in Afghanistan, Northern Pakistan and North-Western India. It is named after the Hindu Kush mountain range. KUSH was taken to the United States in the mid-to-late 1970s and is now cultivated in many parts of the world.

According to the Bible, KUSH (also spelled as CUSH) was the eldest son of Ham, who was a son of Noah, the man who built the Ark.

Care should be taken not to confuse KUSH with CUSH (Good or Cool).

When I write KUSH, I mean this: 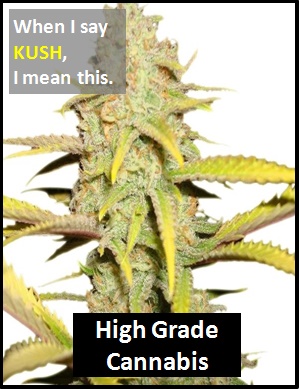 Examples of KUSH in Sentences

Here are examples of KUSH being used in conversations:

An Academic Look at KUSH

CUSH is a slang word. Slang refers to words, phrases and uses that are regarded as very informal and which are often restricted to a special context or a particular group of users.

Example of KUSH Used in a Text

KUSH
Help Us To Improve Cyber Definitions
Please tell us using this form.