What Does OP Mean?

OP means "Original Poster," "Over Powered," "Opposition," and "Observation Post." Here is more information about each of these definitions of OP.

The abbreviation OP is widely used in online forums and message boards with the meaning "Original Poster." In this context, it refers to the user who started a discussion. For example:

OP is used in gaming with the meaning "Over Powered" to refer to items or characters that are too strong compared to other things in the game. Features that are OP cause a game to be imbalanced. For example: Check out our full list of online gaming terms.

OP is also used with the meaning "Opposition" to refer to anyone not in the SQUAD or POSSE (i.e., not in the gang).

In the military, OP means "Observation Post." A military OP is an advanced position from which movements of the enemy can be observed. Many OPs also serve to direct artillery or air strikes.

Here's a short video explaining how to use the abbreviation OP:

When I write OP, I mean this: 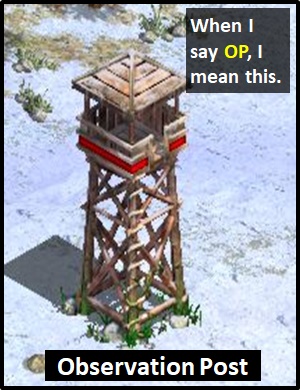 "Over Powered" is another common definition for OP, mainly used on gaming related apps, such as Discord, Telegram and TeamSpeak.

"Opposition" is another common definition for OP.

"Observation Post" is a common definition for OP in military circles.

An Academic Look at OP

When used with the meanings "Original Poster," "Over Powered," and "Observation Post," OP is classified as an initialism abbreviation. Initialisms are different to acronyms, which are spoken like words.

Example of OP Used in a Text