What Does OEM Mean?

OEM (Original Equipment Manufacturer) is used to describe a company which manufactures components or subsystems that are used in another company's end product. OEM can also describe the component as well as the company. For example, a Hewlett-Packard PC may contain a Samsung hard disk drive, making the disk drive the OEM component.

In contrast to aftermarket components (which can be used to upgrade or provide a similar alternative to a broken component), OEM products are like-for-like replacements, and are often used, for example, by vintage vehicle restorers who typically like to keep cars as close to the original manufacturers’ specifications as possible. IT professionals will also often choose OEM parts to replace unserviceable components to ensure compatibility with other software or hardware parts in systems.

When describing software, OEM has two slightly different meanings. Software OEM can describe embedding a software vendor's programmes or scripts into other applications, or it can mean the practice of licensing software to system builders for inclusion in the systems they sell to customers. Microsoft is an example of a company that issues OEM software for its Windows operating systems. Windows OEM products are priced lower than retail counterparts, but use the same software. Typically, the licences are sold in volume deals, meaning the disks sold to PC builders will be valid for many computer builds (and the reason why a PC often does not have a Windows disk when purchased).

When I write OEM, I mean this: 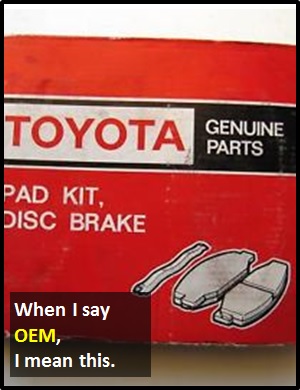 The image shows an original motor part, known as an OEM component.

Examples of OEM in Sentences

Here is an example of OEM being used in a conversation:

An Academic Look at OEM

OEM is an initialism abbreviation. This means it is pronounced using its individual letters (i.e., Oh Ee Emm). Initialisms contrast with acronyms, which are spoken like words.

Example of OEM Used in a Text

OEM
Help Us To Improve Cyber Definitions
Please tell us using this form.