What Does FIRM Mean?

FIRM is widely used as a slang term with the meaning "Fit Body." In the UK, FIRM is also used to refer to a gang that follows a football (i.e., soccer) team. Here is more information about each of these definitions of FIRM, together with examples of use.

FIRM is widely used to refer to a person (male or female) who is considered physically attractive and who has an especially well-defined physique. For example:

In the UK, FIRM is commonly used to refer to a group of football hooligans. Traditionally, troublemakers align themselves with a club and adopt the FIRM name. For example: In conversation: Football hooliganism peaked in the UK during the 1970s, but still remains a problem for some clubs. There are many films that depict football hooliganism in England, including "The Firm" (2008) and "Green Street" (2005).

"Football Gang" is a common definition for FIRM in the UK.

When I write FIRM, I mean this: 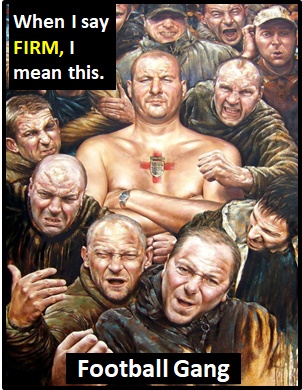 An Academic Look at FIRM

When used with the meaning "Football Gang," FIRM is a noun (i.e., a naming word). However, when used to mean "Fit Body," FIRM is an adjective (i.e., a describing word). For example:

Before the digital era, we might have said something like "Sexy" or "Tasty" instead of using FIRM to mean "Fit Body."

Example of FIRM Used in a Text

FIRM
Help Us To Improve Cyber Definitions
Please tell us using this form.