What Does LY2 Mean?

You will also see this written in the following ways: LY2 is usually written at the end of a conversation between partners or family members. In other words, it is a sign-off (much like CUL8R (see you later) is used between friends). LY2 is a common response to one of the following: (Here is a list of other ways of saying "I love you".)

When I write LY2, I mean this: 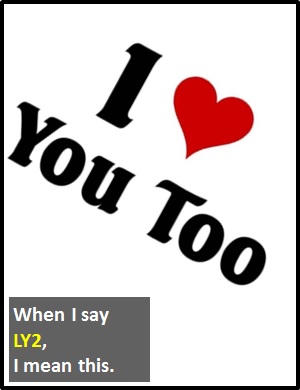 LY2 (Love you too) can be written a number of ways, including ILU2, ILUT, and LYT.

Examples of LY2 in Sentences

Here are two examples of LY2 being used in conversations:

An Academic Look at LY2

LY2 is used as a standalone declarative sentence (i.e., a statement) with the meaning "I love you too".

Of interest, LY2 is classified as a cyber term as opposed to an initialism abbreviation or an acronym because the "2" is a homonym of "too" not the initial letter.

Before the digital era, we would have just said "I love you too" instead of LY2.

Example of LY2 Used in a Text