ILYTB means "I Love You To Bits." The origin of "I love you to bits" is unclear. ILYTB is typically (but not exclusively) used in a casual way (i.e., often between friends or family members). It has a playful connotation and so would not usually be used in a serious scenario (e.g., gazing into a partner's eyes over a candlelit dinner).

When I write ILYTB, I mean this: 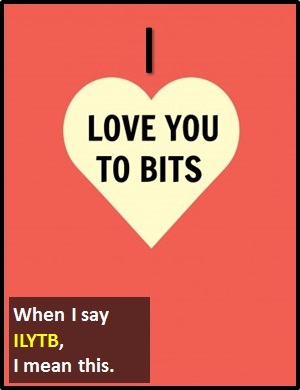 ILYTB (I love you to bits) is considered a casual way of saying I love you.

Examples of ILYTB in Sentences

Here are examples of ILYTB being used in conversations:

An Academic Look at ILYTB

ILYSMB is a declarative sentence (i.e., a statement). In other words, it is not used as a part of speech in a wider sentence.

Of note, ILYTB is an initialism abbreviation. Technically, this means it is pronounced using its individual letters (i.e., Aye El Wye Tee Bee), but as this is harder to say than "I love you to bits," it is not often uttered using its letters. In other words, the abbreviation ILYTB is for efficiency in writing and not efficiency in speech.

Example of ILYTB Used in a Text