What Does BILY Mean?

Although the phrase "I Love You" is usually a declaration of deep emotional attachment within a romantic relationship, the abbreviation BILY is also often used between family members and close friends in a more light-hearted way. For example:

When I write BILY, I mean this: 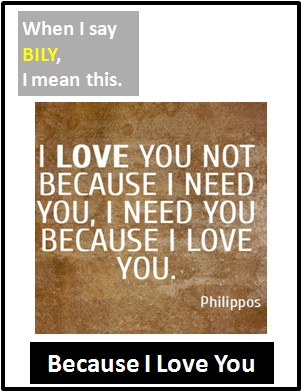 BILY means "Because I Love You."

Examples of BILY in Sentences

Here are examples of BILY being used in jokes and conversations:

An Academic Look at BILY

BILY is an initialism abbreviation. Technically, this means it is pronounced using its individual letters (i.e., Bee Eye Ell Why), but it is not often uttered using its letters. In other words, the abbreviation BILY is for efficiency in writing and not efficiency in speech. Intialisms contrast with acronyms, which are spoken like words.

Before the digital era, we might have just said "Because I Love You" instead of using the abbreviation BILY.

Example of BILY Used in a Text

BILY
Help Us To Improve Cyber Definitions
Please tell us using this form.