H2IK means "Hell If I Know." The abbreviation H2IK is used to mean "I don't know." It is typically used to express complete ignorance of the subject being discussed. When used between friends, H2IK may indicate a strong lack of interest. However, when used in a work environment, it usually indicates a lack of knowledge.

The abbreviation H2IK originates from the TV show Defying Gravity. As explained in the show, it can be used to appear as though you're giving a technical explanation when you actually don't know what you're talking about. If someone familiar with the term hears it, H2IK can be considered a request for help. For example: Of note, H2IK is identical in meaning to the abbreviation HTHSIK ("How The Hell Should I Know").

When I write H2IK, I mean this: 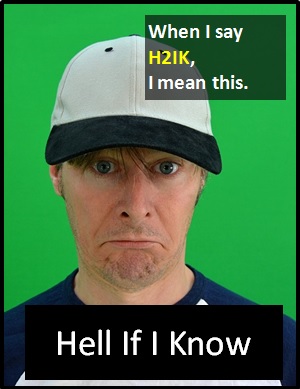 Examples of H2IK in Sentences

Here are examples of H2IK being used in conversations:

An Academic Look at H2IK

H2IK is defined as a cyber term because some of its characters are used as substitutes for letters. Most cyber terms were introduced to reduce the number of key strokes required to write the word, but since the arrival of predictive texting and keyboards on mobile devices, this efficiency is no longer required. Nevertheless, cyber terms are still regularly used to make messages more entertaining or to express individuality. Cyber terms differ from icons because they are not pictorial representations.

Before the digital era, we might have said something like "How on earth would I know that" instead of using H2IK.

Example of H2IK Used in a Text

H2IK
Help Us To Improve Cyber Definitions
Please tell us using this form.