What Does FAIK Mean?

FAIK means "For All I Know." The abbreviation FAIK is used to emphasize that a speaker does not know something. It also suggests that they do not care. For example, if a person asked where your sister was and you answered "I'm not sure, could be Timbuktu for all I know" it suggests that you neither know nor care where she has gone. FAIC (For All I Care) could be used to present the same sentiment.

When I write FAIK, I mean this: 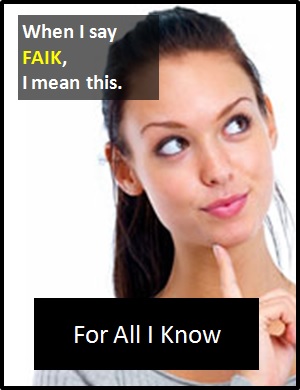 FAIK means "For All I Know."

Examples of FAIK in Sentences

Here are examples of FAIK being used in conversations:

An Academic Look at FAIK

FAIK is typically used as an adverbial phrase of manner. An adverb of manner modifies a verb to describe how the verb is performed. For example:

(Here, FAIK tells us how the verb was performed, is being performed, or will be performed.)

Example of FAIK Used in a Text

FAIK
Help Us To Improve Cyber Definitions
Please tell us using this form.