What Does WTH Mean?

The abbreviation WTH is most commonly used as a rhetorical question, with the meaning "What The Hell?" or "What The Heck?". In this context, WTH expresses surprise, shock or anger.

WTH is a more polite version of the far more commonly used abbreviation WTF (What The F*ck?).

"Who the Hell/Heck?" is another common definition for WTH

WTH is also used with the meaning "Where the Hell/Heck?".

When I write WTH, I mean this: 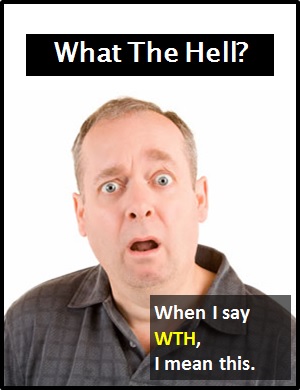 When used with the meaning "What the Hell/Heck?", WTH is a politer version of WTF.

Examples of WTH in Sentences

Here are examples of WTH being used in conversations:

An Academic Look at WTH

WTH is typically used an an interjection. An interjection is included in a sentence to express a sentiment such as surprise, anger or irritation (as well as disgust, joy, excitement, or enthusiasm).

WTH also often plays the role of an interrogative sentence (i.e., a question). However, even when used as a question, it is commonly seen without a question mark (i.e., it can be written "WTH?" or "WTH").

Example of WTH Used in a Text

WTH
Help Us To Improve Cyber Definitions
Please tell us using this form.