What Does GC Mean?

When used online the abbreviation GC most commonly means "Group Chat." However, GC has a number of other meanings, including "Good Condition," "Good Call," "Gay Couple," and "Garbage Collect." Here is more information about each of these definitions of GC. Examples of use can be found below.

Many instant messaging services, such as WhatsApp, have a chat feature that allows users to send a message to multiple contacts within a group. This is known as "Group Chat" (often abbreviated to GC). Group Chat is typically used by family groups, groups of friends, or clubs.

The abbreviation GC is commonly seen on sites such as eBay and Gumtree, as well as in classified advertisements in newspapers, where it is used to indicate that an item offered for sale is in "Good Condition." GC contrasts with the following terms, which indicate the sale item is in perfect condition:

In general online chat and in text messaging, GC is used with the meaning "Good Call" to express approval of a decision or suggestion.

GC is used on online dating sites, such as Craigslist, Tinder, Zoosk and Match.com, with the meaning "Gay Couple." In this context it indicates the sexual orientation of users of the site.

In computing, GC is with the meaning "Garbage Collect" (or "Garbage Collection"). This is a process of memory management by which memory occupied by objects that are no longer in use by a program is reclaimed. Until the early 2000s, the process of GC was something programmers had to do with code during runtime. However, it is now generally an automatic procedure.

"Good Condition" is a widely used definition for GC in classified ads.

"Good Call" is another common definition for GC.

"Gay Couple" is a definition for GC which is most often noted on online dating sites.

When I write GC, I mean this: 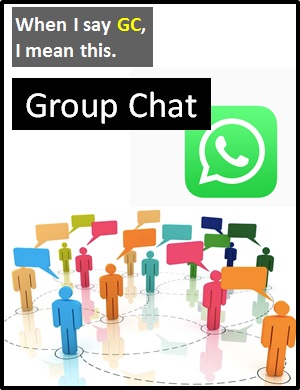 Examples of GC in Sentences

Here are examples of GC being used in conversations:

An Academic Look at GC

Because it is pronounced using its individuals letters (i.e., Gee See), each of which represents a word, GC is classified as an initialism abbreviation. Initialisms contrast with acronyms, which are spoken like words (e.g., NASA, NATO).

Example of GC Used in a Text

Using GC on a Cell Phone (Texting, Whatsapp, and Tinder)

GC
Help Us To Improve Cyber Definitions
Please tell us using this form.