What Does F8 Mean?

F8 means "Fate" (as in "events outside a person's control that have been predetermined by a supernatural power). The term uses the sound of the number 8 to replace "ATE". In other words: The following terms also make use of this efficiency: Of interest, terms with numbers like H8, GR8 (Great), and M8 (Mate) gave rise to terms like the following: 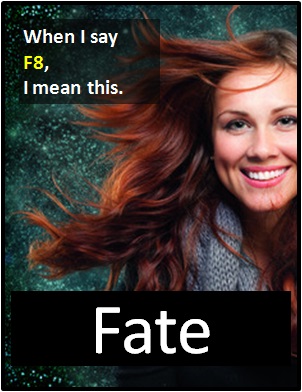 I think finding that Ł20 was fate.

Examples of F8 in Sentences

Here are examples of F8 being used in conversations:

An Academic Look at F8

F8 is typically used as a noun. Of note, F8 is classified as a cyber term (as opposed to an acronym or an abbreviation) because it employs both letters and numbers. In the early days of texting, cyber term terms were used for brevity, but, particularly with the advent of predictive texting, they are now mostly employed for fun.

Example of F8 Used in a Text

F8
Help Us To Improve Cyber Definitions
Please tell us using this form.