What Does GR9 Mean?

Other terms that include this escalation from 8 to 9 include: The use of numbers to represent letters is common in chatroom language (sometimes called LEET) and texting. Once these terms become established, their meanings can be strengthened or weakened by increasing or decreasing the number. The most common example is with the heart icon <3 (love) . For example:

When I write GR9, I mean this: 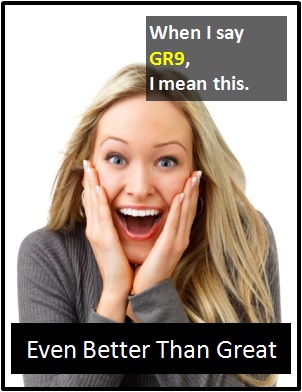 GR8 is great. GR9 is excellent.

Examples of GR9 in Sentences

Here are examples of GR9 being used in conversations:

An Academic Look at GR9

GR9 is used like an adjective. As it includes both a letter and number, GR9 is not an acronym or an abbreviation but a cyber term. Originally, cyber term terms were introduced for brevity, but, particularly with the advent of predictive texts, they are now mostly employed for fun.

Before the digital era, we would have just said "superb," "terrific," or "outstanding" instead of GR9.

Example of GR9 Used in a Text

GR9
Help Us To Improve Cyber Definitions
Please tell us using this form.