What Does DEBO Mean?

DEBO means "To Steal" and "Owned" (as in "totally Beaten or Outdone.") It is based on a character played by Tommy 'Tiny' Lister Jr.

DEBO is a popular misspelling of the name of the character "DEEBO" in the 1995 movie "Friday" and the 2000 sequel "Next Friday."

In the movies, DEBO (played by Tommy "Tiny" Lister Jr.) bullies the principal character (played by rapper Ice Cube). The actions of DEBO led to his name being adopted to refer to stealing, or to "owning" a person (i.e., totally beating or outdoing them). For example:

"Tiny" Lister was previously a professional wrestler. He appeared in a variety of movies as well as TV series and music videos. He died on 10 December 2020, at the age of 62. Here are a few clips of him in his most popular role:

The Best Of DEBO

Here's a short video explaining how to use DEBO:

When I write DEBO, I mean this: 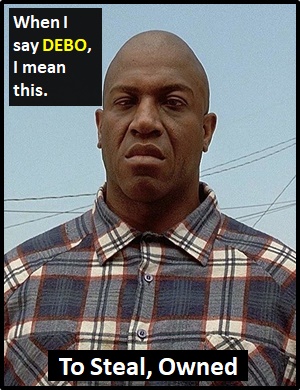 "Owned" (as in "Totally Beaten or Outdone") is another common definition for DEBO.

An Academic Look at DEBO

DEBO is a slang word and a neologism.

Slang refers to words, phrases and uses of language that are regarded as very informal and which are often restricted to a special context or a particular group of users. A neologism is a newly coined word or phrase.

Example of DEBO Used in a Text