What Does FOMO Mean?

FOMO means a "Fear Of Missing Out." FOMO is characterized by the need to remain engaged with others' activities to ensure you do not miss out on something fun, exciting, beneficial, or profitable.

While FOMO can be a serious condition that leaves the sufferer feeling useless and unwanted, the term is mostly used in a lighter sense as a justification for attending an event. For example: FOMO is increasingly being recognized as a genuine phenomenon that can cause stress. It derives from a sense of envy and can also affect self-esteem. Stress caused by FOMO is often exacerbated by social-media sites, particularly Facebook and Instagram. These sites routinely present the lives of others as far happier and as more fulfilling than reality. In essence, social-media applications are providing a platform for disingenuous bragging, which sufferers of FOMO consume as a truth, causing them to compare their reality with others' non-realities. If you suffer from FOMO, remember this: Everyone's Facebook is no one's reality.

When I write FOMO, I mean this: 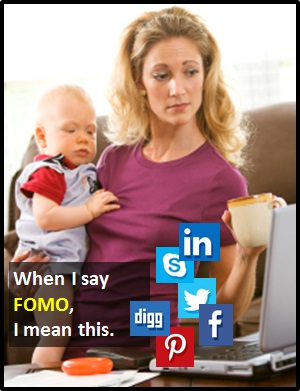 The image shows a busy mum interacting on lots of social-media platforms because of her fear of missing out.

Examples of FOMO in Sentences

Here are some examples of FOMO being used in sentences:

An Academic Look at FOMO

FOMO is an acronym (i.e., an abbreviation spoken like a word). Acronyms differ from initialism abbreviations, which are pronounced using their individual letters. FOMO typically plays the role of a noun, but it is occasionally seen as an adjective. For example:

FOMO can also be written as FoMO or FoMo.

Example of FOMO Used in a Text

FOMO
Help Us To Improve Cyber Definitions
Please tell us using this form.