What Does BTS Mean?

BTS Means "The Bangtan Boys," "Better Than Sex," and "Be There Soon."

The most common meanings for BTS in text-based messaging and chats used to be "Better Than Sex" and "Be There Soon." However, BTS is now more often used to refer to the Korean boy band BTS ("The Bangtan Boys").

Here's more information about each of these meanings of BTS, including examples of use.

BTS is the name of a 7-member South Korean boy band, AKA the "Bangtan Boys." BTS stands for "Bang Tan Sonyeondan," which literally translates as the "Bulletproof Boy Scouts." In July 2017, as part of a revamp of their image, BTS announced they would also be known as "Beyond The Scene."

The seven members of BTS and their roles within the band are: In April 2021, as a testament to the band's increasing worldwide fame (probably!), BTS teamed up with fast-food giant McDonald's to launch a special "BTS Meal" to be released in the United States, Canada and Brazil on May 26, and soon thereafter in nearly 50 countries. The meal includes Chicken McNuggets, medium fries, and Coke, as well as two new dipping sauces (sweet chili and Cajun flavors) inspired by McDonald's South Korea recipes.

Fans of the band are called the BTS ARMY. (According to some fans, ARMY is an acronym, meaning "Adorable Representative M.C. for Youth.")

Check out one of the band's massive hits:

Outside of fans of the boy band, BTS usually means "Better Than Sex." In this context, BTS is used as an expression of satisfaction or contentment. Typically, BTS is preceded with a hashtag ("#BTS") and follows a statement. For example:

BTS is also used with the meaning "Be There Soon" (i.e., "I will arrive shortly").

Here's a short video explaining how to use BTS:

When I write BTS, I mean this: 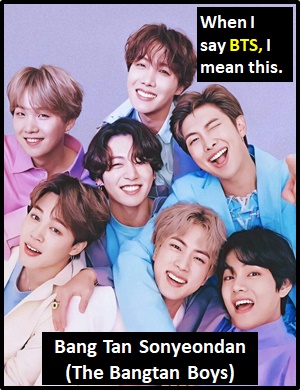 BTS also means "Better Than Sex" and "Be There Soon."

The most common definition for BTS on social media and messaging apps is "Bang Tan Sonyeondan" ("The Bangtan Boys").

"Better Than Sex" is another common definition for BTS.

BTS also means "Be There Soon."

Examples of BTS in Sentences

Here are examples of BTS being used in conversations:

(Here, BTS means both "The Bangtan Boys" and "Better Than Sex.")

An Academic Look at BTS

As it is pronounced using its individual letters (i.e., "Bee Tee Ess"), BTS is classified as an initialism abbreviation. Initialisms are different to acronyms, which are spoken like words.

Example of BTS Used in a Text