What Does AKA Mean?

AKA (Also Known As) is used to introduce an alias. It is most often used by law-enforcement officials to notify of a criminal's false and alternative identity. For example: AKA can also be used in similar way to "i.e." (id est in Latin, which translates best as "that is" but used to mean "in other words"). For example: Of note, the abbreviation AKA can also be written aka or a.k.a.

The business equivalent of AKA is DBA (Doing Business As), which is a legal term to show that a trading name is not the legal name of the person who owns the business. (DBA is also seen as "o/a" (Operating As) or "t/a" (Trading As).)

When I write AKA, I mean this: 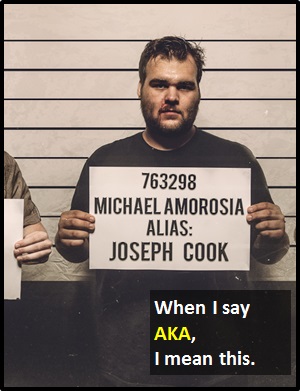 The image shows "Michael" AKA "Joseph."

Examples of AKA in Sentences

Here are examples of AKA being used in sentences:

An Academic Look at AKA

AKA is an initialism abbreviation. This means it is pronounced using its individual letters (i.e., Ay Kay Ay). (Initialisms contrast with acronyms, which are spoken like words.)

Example of AKA Used in a Text

AKA
Help Us To Improve Cyber Definitions
Please tell us using this form.