What Does BLAZE Mean?

BLAZE means "To Smoke Cannabis." This slang term denotes the act of smoking the drug cannabis. The name is inspired by the light at the end of a cigarette. The verb to blaze means to burn fiercely or brightly.

Here are some other terms that mean to smoke cannabis: There are many slang terms related to cannabis. This is likely due to the fact that it is an illegal substance. Once adults or authorities realise what one term means, it makes way for another to take its place.

When I write BLAZE, I mean this: 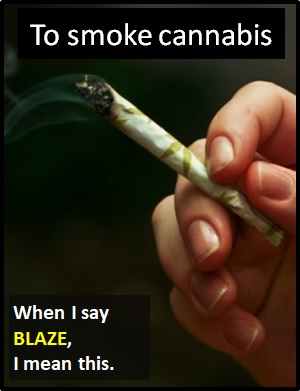 [To blaze means to smoke cannabis]

Examples of BLAZE in Sentences

Here are examples of BLAZE being used in conversations:

An Academic Look at BLAZE

BLAZE is typically used as a verb (i.e. a doing word). For example:

(Here, BLAZE is being used as a verb.)

Many drug terms existed before the digital era. Drug users are constantly trying to dodge the authorities and parents. It is due to this, that these terms change and evolve every day.

Example of BLAZE Used in a Text

BLAZE
Help Us To Improve Cyber Definitions
Please tell us using this form.