The term 420 is often used by cannabis smokers as a way to refer discreetly to the drug.

The origin of 420 as a name for cannabis is somewhat disputed. There are a number of popular theories, including: Despite the disputes over its origin, the numbers 420 are symbolic to cannabis users. There is an unofficial yearly celebration observed on April 20th (4/20) and this date has also been used to stage protests & political events in favor of the legalization of the drug. Typically, frequent users of the drug will also use the time 4:20pm as a daily excuse to smoke cannabis.

As a result of the popularity and significance of 420, mile marker and street signs bearing the number are frequently targets of theft. The states of Colorado & Idaho had to remove or replace their mile marker 420 signs because of this issue. 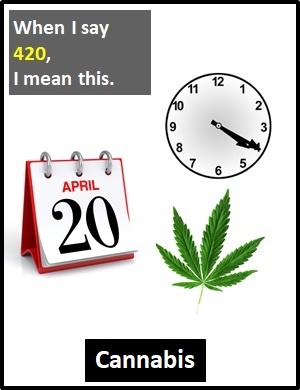 420 is a discreet way of referring to cannabis.

Examples of 420 in Sentences

Here are examples of 420 being used in conversations:

420 is defined as a cyber term because its characters are used as substitutes for letters (in this case, 420 replaces the date April 20th, or the time 4.20 pm).

Most cyber terms were introduced to reduce the number of key strokes required to write a word or phrase. However, since the arrival of predictive texting and keyboards on mobile devices, this efficiency is no longer required.