What Does BUN Mean?

BUN means "To Smoke a Joint" and "One Ounce of Cannabis."

To Smoke a Joint

The word BUN is widely used as a slang term to refer to smoking a joint of cannabis. For example:


In this context BUN is believed to derive from the Jamaican pronunciation of the word BURN, which is also used with the same meaning.

One Ounce of Cannabis

In some parts of the US and Canada, BUN is also used to refer to one ounce of cannabis. For example:

"One Ounce of Cannabis" is another definition for BUN.

When I write BUN, I mean this: 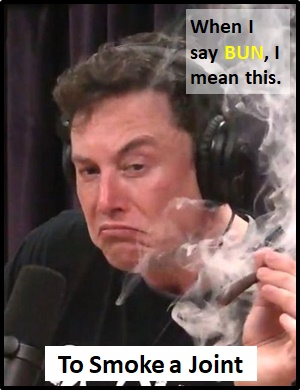 BUN may also refer to "One Ounce of Cannabis."

An Academic Look at BUN

Whether used with the meaning "Smoke a Joint" or "One Ounce of Cannabis," BUN is classified as a slang word. Slang refers to words, phrases and uses of language that are regarded as very informal and which are often restricted to a special context or a particular group of users.

Example of BUN Used in a Text

BUN
Help Us To Improve Cyber Definitions
Please tell us using this form.