What Does BLATES Mean?

BLATES means "blatantly." BLATES is a slang term that means blatantly, obviously, or certainly. Typically, the term is used on social media and other messaging platforms. Recently, the phrase is becoming more popular in conversation within the younger generation. Of note, BLATES is only short for the adverb blantantly and not the adjective blatant.

When I write BLATES, I mean this: 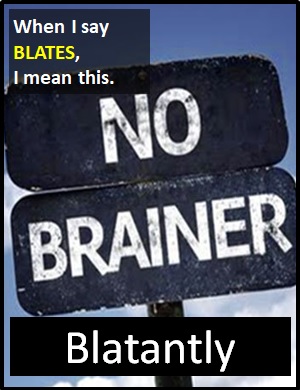 [BlATES is a contraction of Blatantly]

Examples of BLATES in Sentences

Here are examples of BLATES being used in conversations:

An Academic Look at BLATES

Before the digital era, we would have just said "blatantly" instead of BLATES. The phrase has been abbreviated for ease when messaging and using social media. Over time, the term has also become popular in spoken conversation.

Example of BLATES Used in a Text

BLATES
Help Us To Improve Cyber Definitions
Please tell us using this form.