What Does BBL Mean?

BBL means "Brazilian Butt Lift" or "Be Back Later". Here is more about these two meanings:

If exercising your way to a more shapely bum sounds too much like hard work, then it is possible to attain a more voluminous, curvier bottom with a BBL. A BBL is a cosmetic-surgery technique that uses liposuction and fat-grafting to add volume, curves, and lift. (Of note, in Britain, it is called a "Brazilian Bum Lift.")

A BBL has become one of the most popular plastic-surgery procedures, despite it being shrouded in controversy over health risks. (According to Britain's Nation Health Service, the main concern is that the injected fat can cause a blockage in a blood vessel in the lungs (pulmonary embolism), which can be fatal.)

When used on instant-messaging platforms (e.g., Skype, gaming chat, chat forums), BBL means "Be Back Later." Typing BBL is a way of signing off temporarily. It means that you intend to be away for an unspecified amount of time, but not soon. Of note, BBL contrast with BRB (Be Right Back), which is used to announce a short absence. BBL suggests a break of a few hours, while BRB suggests a break of a few minutes.

Here's a short video explaining how the abbreviation BBL is used:

When I write BBL, I mean this: 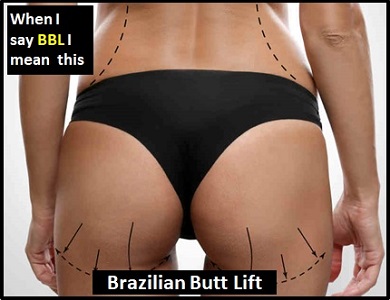 BBL suggests you'll be back in a few hours.

Examples of BBL in Sentences

Here are examples of BBL being used in conversations:

An Academic Look at BBL

When it means "be back later," BBL is used as a standalone declarative sentence (i.e., a statement), which translates best as "I will be back later." In other words, it is not used as another part of speech within a wider sentence.

In both meanings, BBL is an initialism abbreviation. This means it is pronounced using its individual letters (i.e., Bee Bee Ell). (Of note, initialisms contrast with acronyms, which are spoken like words.)

Example of BBL Used in a Text

BBL
Help Us To Improve Cyber Definitions
Please tell us using this form.