What Does BRB Mean?

The abbreviation BRB means "Be Right Back." It is typically used on instant-messaging platforms (e.g., chat rooms, Skype, gaming chat) to announce being away for a short time.

BRB was originally used for breaks such as answering the door, going to the toilet, or preparing a drink (i.e., a break lasting no more than a few minutes). However, it is now often misused for long breaks. (Which can be very annoying for those expecting the sender to return quickly!)

When I write BRB, I mean this: 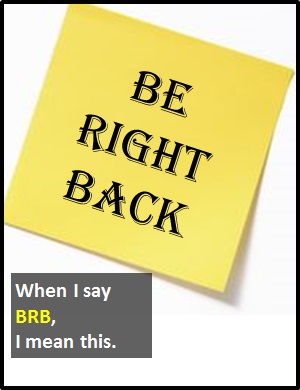 BRB indicates that the sender will be away from the keyboard for a short period.

Examples of BRB in Sentences

Here are examples of BRB being used in conversations:

An Academic Look at BRB

BRB is used as a standalone declarative sentence (i.e., a statement), which translates best as "I will be right back." In other words, it is not used as another part of speech within a wider sentence.

BRB is an initialism abbreviation. This means it is pronounced using its individual letters (i.e., Bee Arr Bee). (Initialisms contrast with acronyms, which are spoken like words.

Before the digital era, we might have said something like "back in a jiffy" or "I'll be two shakes of a lamb's tail" instead of BRB.

Example of BRB Used in a Text

BRB
Help Us To Improve Cyber Definitions
Please tell us using this form.