BBIAF means "Be Back in A Few." The abbreviation BBIAF is typically used in online and text-based communications, especially online forums, to indicate that a participant is leaving, but will be back in a few minutes.

BBIAF is similar in meaning to BBIAB ("Be Back In A Bit") and BBIAM ("Be Back In A Minute"). It contrasts with BBL ("Be Back Later"), which suggests a break of up to a few hours.

When I write BBIAF, I mean this: 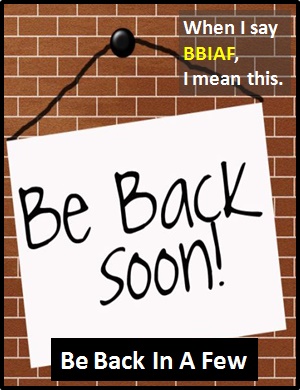 BBIAF means that I will be right back.

Examples of BBIAF in Sentences

Here are examples of BBIAF being used in conversations:

An Academic Look at BBIAF

BBIAF is typically used as a standalone declarative sentence (i.e., a statement), which translates best as "I will be back in a few minutes." It is not normally used as another part of speech within a wider sentence.

BBIAF is an initialism abbreviation. Technically, this means it is pronounced using its individual letters (i.e., "Bee Bee Eye Ay Eff"), but as this is harder to say than "Be Back In A Few" it is not often spoken using its letters. The abbreviation BBIAF is for efficiency in writing and not efficiency in speech.

Before the digital era, we might have said something like "Back soon" or "Back in just a sec" instead of using BBIAF.

Example of BBIAF Used in a Text

BBIAF
Help Us To Improve Cyber Definitions
Please tell us using this form.