What Does BB Mean?

The abbreviation BB is widely used with the meaning "Baby" as a term of endearment (especially by girls).

BB is sometimes used in internet chat rooms to indicate that a participant is leaving the group, but will be back shortly.

BB is also used to refer to the television reality show "Big Brother," which was originally broadcast in the Netherlands and subsequently syndicated internationally. (The term "Big Brother" originates from George Orwell's novel Nineteen Eighty-Four (first published in 1949), with its theme of constant surveillance of the populace.)

BB is used on online dating sites as a way of describing physical appearance. In this context, BB indicates that the user has a the physique of a body builder or is looking for someone with such a physique.

A BB gun is a type of air gun designed to fire spherical projectiles, similar to ball bearings.

BB is sometimes used to refer to the game of basketball.

BB is also used to refer to "Blackberry," the communications company that was once one of the most prominent producers of smartphones in the world.

BB means "Baby." This is the most common definition for BB on Snapchat, WhatsApp, Facebook, and other text or messaging services.

BB also means "Be Back."

"Body Builder" is another definition for BB.

"BB Gun" is another definition for BB.

When I write BB, I mean this: 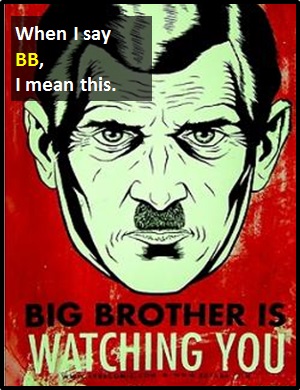 "Big Brother" is one of eight common definitions of BB.

Examples of BB in Sentences

Here are examples of BB being used in jokes:

An Academic Look at BB

BB is normally classed as an initialism abbreviation. It is pronounced using its individual letters (i.e., "Bee Bee"). Initialisms are different to acronyms, which are spoken like words.

Example of BB Used in a Text

BB
Help Us To Improve Cyber Definitions
Please tell us using this form.

BBAM (be back after meal) BBIAM (be back in a minute) BBL (be back later) IWBB (I will be back) BRAH (brother) BRO (brother) Digital Dating Abbreviations, Acronyms & Slang Terms