What Does AVO Mean?

AVO is a slang term which is widely used, especially in Australia, to mean "Avocado" or "Afternoon." Also in Australia, AVO is also an abbreviation for "Apprehended Violence Order." Here is more information about each of these definitions of AVO.

In speech and texting, AVO is widely used as an abbreviation of the word "Avocado."

AVO is also an abbreviation of "Apprehended Violence Order." An AVO is a court order imposed to restrict threatening, violent or anti-social behavior. (Similar to an ASBO in the UK.)

"Avocado" is a common definition for AVO, especially in Australia.

When I write AVO, I mean this: 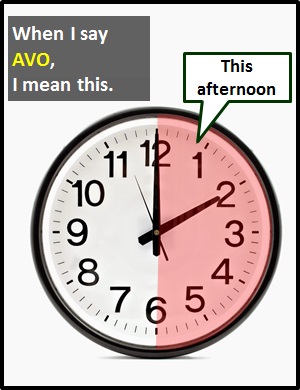 An Academic Look at AVO

When used to mean "Afternoon," AVO may serve as a noun (i.e., a naming word). However, it is typically used as an adverb of time, meaning "this afternoon." An adverb of time modifies a verb to describe when the verb occurs. For example:

(Here, "this AVO" modifies the verb are driving.)

Example of AVO Used in a Text

AVO
Help Us To Improve Cyber Definitions
Please tell us using this form.