What Does ARVO Mean?

ARVO means "Afternoon". The term ARVO is thought to have originated in Australia, where it is slang for "Afternoon". In other English-speaking countries, ARVO is now used in text-based communications with the same meaning.

Of note, "Afternoon" can also be abbreviated as AVO.

When I write ARVO, I mean this: 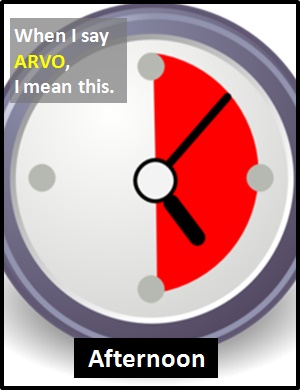 ARVO is that time between the morning and the evening.

Examples of ARVO in Sentences

Here are examples of ARVO being used in conversations:

An Academic Look at ARVO

ARVO is slang which is used as a cyber term. Slang is very informal language, typically used by a particular group of people. It is more often used in speech than in writing. However, in text-based communications, ARVO is often employed as a written abbreviation for "Afternoon".

Before the digital era, we would have just said "Afternoon" instead of using ARVO.

Example of ARVO Used in a Text