What Does GN Mean?

The abbreviation GN is widely used online and in text messaging with a number of different definitions. In gaming circles (on apps such as Discord and TeamSpeak) GN most often means "Gamer Name." In general chat it is typically used with the meaning "Good Night." GN is also sometimes used to mean "Get Naked." Here is a more information about each of these definitions of GN, with examples of use.

In video gaming, GN is used with the meaning "Gamer Name" to refer to the the nickname a player uses in a game. (See also IGN (In Game Name.))

GN is widely used to mean "Good Night." It is a way of expressing good wishes at the end of a conversation, just before going to bed. There are many other ways of abbreviating the phrase "Good Night," including:

On adult chat forums and in sexting, GN is sometimes used with the meaning "Get Naked." In this context, it is an order given to a person to remove his or her clothes.

"Get Naked (I Got A Plan)" is a song featured on Britney Spears' fifth full-length studio album "Blackout." The song features producer Danja on vocals.

"Gamer Name" is the most common definition for GN in gaming related communications on apps such as Discord, TeamSpeak and Telegram.

"Get Naked" is another definition for GN.

When I write GN, I mean this: 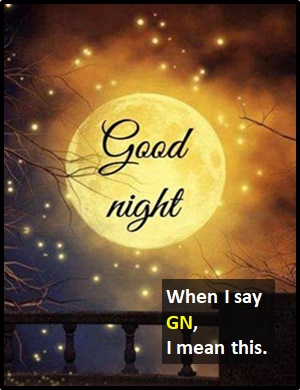 Examples of GN in Sentences

Here's an example of GN being used in conversation:

An Academic Look at GN

As it is pronounced using its individual letters (i.e., "Gee Enn"), GN is classified as an initialism abbreviation. Initialisms are different to acronyms, which are spoken like words. GN is not often spoken using its letters. It is usually employed for efficiency in writing and not efficiency in speech.

Example of GN Used in a Text

GN
Help Us To Improve Cyber Definitions
Please tell us using this form.