What Does ALT Mean?

The Precise Meaning of ALT Depends on Context

The precise meaning of ALT depends heavily on the context in which it used.

Alt (in a Music Context)

In music and fashion, "ALT" means "alternative." It is used as an antonym for "mainstream." In other words, a follower of ALT music is someone who likes non-chart music by niche bands.

Alt (in a Gaming Context)

In gaming, "ALT" refers to a second ID for a player.

Alt (in a Social Media Context)

On social media, "ALT" refers to a second account. Often an ALT account is set up to counter a view by the original account in order to kickstart a conversation or to add controversy.

Alt (on a Keyboard)

The ALT Key on a keyboard is to the left of the space bar. It is typically used in combination with another key as a shortcut to run a Windows function. For example, "Alt Print Screen" captures an image only of the window that is in use, not the whole screen. Also, in a program like Microsoft Word, the ALT Key can be held down while an ALT Code is entered as a quick way to produce a special symbol. Here are pages that list thousands of useful Alt Codes:

In website design, the ALT attribute is part of the IMG tag. It is used to assist search engines (like Google) with finding relevant images. It is also used by visually impaired internet users to help understand what the image is.

When I write ALT, I mean this: 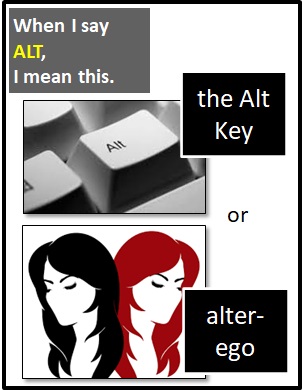 ALT often refers to the Alt Key or an alternative account or profile (i.e., an alter-ego).

Example of ALT Used in a Text

ALT
Help Us To Improve Cyber Definitions
Please tell us using this form.