What Does F2F Mean?

F2F means "Face to Face." The abbreviation F2F means seeing or meeting someone person to person rather than online or by telephone.

"Face to Face" was also a song recorded and released by French electronic-music duo Daft Punk in 2001. The song topped the Billboard Hot Dance Club Play list in 2004.

When I write F2F, I mean this: 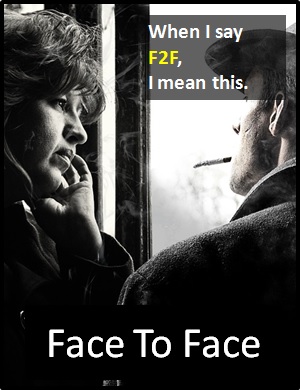 "Face to face" means to meet in person.

Examples of F2F in Sentences

Here are examples of F2F being used in conversations:

An Academic Look at F2F

F2F is classified as a cyber term as opposed to an initialism abbreviation or an acronym. Initially, cyber term terms were introduced for brevity, but, particularly with the advent of predictive texting and on-screen keyboards, they are now mostly employed for fun. Cyber terms differ from icons because they are not pictorial representations.

F2F can be both an adjective, as in "the two men had a face-to-face conversation" or as an adverb, if referring to direct confrontation (e.g., "she came face-to-face with her attacker)."

Example of F2F Used in a Text

F2F
Help Us To Improve Cyber Definitions
Please tell us using this form.