What Does NOOB Mean?

NOOB is used to refer to an "Inexperienced or New Person." It is derived from the word NEWBIE (or the shortened NEWB).

NOOB is used particularly in the gaming community to describe a newcomer who has little or no previous experience of a game. However, unlike the term NEWBIE, which labels the beginner in a positive light for enthusiastically trying to learn, NOOB has a negative and derogatory tone attached to it.

NOOBs are best described as "know-it-alls" who talk a good game but lack the ability to match. They also behave in a selfish, arrogant or disrespectful way, despite their relative inexperience.

NOOBs will often use a derivative of the hacker language online. This involves deliberate misspellings and the use of numbers to replace letters to veil what they are typing to make it difficult for others to read (in order to appear intelligent or very experienced.) The term N00B is a common alternative to NOOB. The numbers 00 replacing OO in the word are used to mock the mimicking of the hacker language by NOOBs.

When I write NOOB, I mean this: 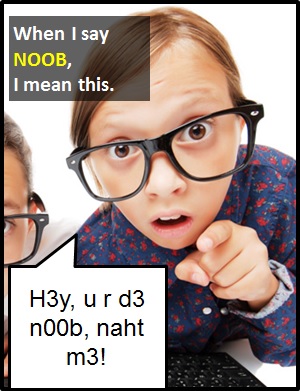 The image shows a NOOB calling other people NOOB.

"Inexperienced or New Person" is the most common definition for NOOB on Snapchat, WhatsApp, Facebook, Twitter, and Instagram, as well as on gaming related apps, such as Discord and TeamSpeak.

Examples of NOOB in Sentences

Here are examples of NOOB being used in a conversation:

An Academic Look at NEWBIE

NOOB is a noun derived from the portmanteau word NEWBIE, which is formed by amalgamating new and a contraction of blood or boy.

Before the digital era, we might have said something like "wise guy" or "know-it-all" instead of NOOB.

Example of NOOB Used in a Text