What Does AMAP Mean?

The abbreviation AMAP is commonly used in internet forums and text speak to mean "As Much As Possible" or "As Many As Possible."

AMAP is also the initials of the Arctic Monitoring and Assessment Programme, which is a working group of the Arctic Council, an intergovernmental forum promoting cooperation, coordination and interaction among the Arctic States, Arctic indigenous communities and other Arctic inhabitants.

When I write AMAP, I mean this: 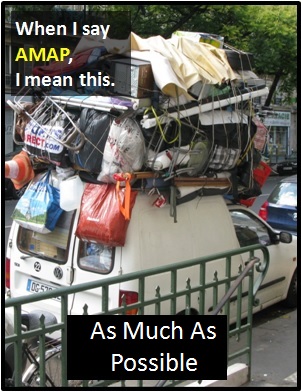 AMAP can mean "As Much As Possible," as in this case.

Examples of AMAP in Sentences

Here are examples of AMAP being used in jokes and conversations:

(In this case, AMAP means "As Much As Possible.")

(In this case, AMAP means "As Many As Possible.")

An Academic Look at AMAP

AMAP is both an initialism abbreviation and an acronym. This means that although it is usually pronounced using its individual letters (i.e., Eh Em Eh Pee), it can also be spoken like a word (i.e., Eh-map).

Example of AMAP Used in a Text

AMAP
Help Us To Improve Cyber Definitions
Please tell us using this form.

BIG TIME (much more than normal) MUCHO (many or very) TMTC (too many to count) *.* (absolutely everything ) AON (all or nothing) LOTTA (a lot of) E1 (everyone)