AEAP means "As Early As Possible." Use of the abbreviation AEAP indicates that the sender wishes something to be done without delay.

Here's a short video explaining how to use AEAP:

When I write AEAP, I mean this: 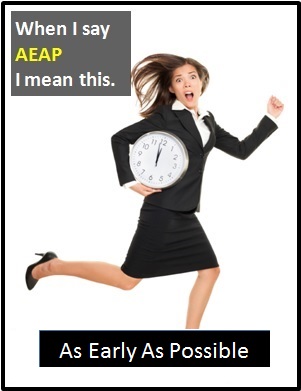 Examples of AEAP in Sentences

Here are examples of AEAP being used in conversations:

An Academic Look at AEAP

Of note, AEAP is an initialism abbreviation. Technically, this means it is pronounced using its individual letters (i.e., Aay Ee Aay Pee), but as this is harder to say than "As early as possible," it is not often uttered using its letters. In other words, the abbreviation AEAP is for efficiency in writing and not efficiency in speech.

Before the digital era, we might have just said "As Early As Possible" instead of using the abbreviation AEAP.

Example of AEAP Used in a Text

AEAP
Help Us To Improve Cyber Definitions
Please tell us using this form.