SYIH means "See You In Hell."

The abbreviation SYIH is often used with the meaning "See You In Hell" as a joking salutation at the end of a conversation, when the correspondents will next meet at work, in class or in similar circumstances.

SYIH can also be used as a threat and indicates that the sender will go to any lengths to stop the recipient doing something. In this context it has the same meaning as the phrase "I will see you in Hell first."

When I write SYIH, I mean this: 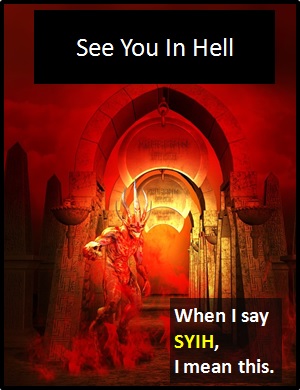 SYIH - It's hot down there.

Examples of SYIH in Sentences

Here are examples of SYIH being used in conversations:

An Academic Look at SYIH

SYIH is typically used as a standalone declarative sentence (i.e., a statement). It is not normally used as another part of speech within a wider sentence.

SYIH is an initialism abbreviation, which means it is pronounced using its individual letters (i.e., Ess Why Eye Aich). However, as this is harder to say than "See You In Hell," it is not often uttered using its letters.

Before the digital era, we might have just said "See You In Hell" instead of using SYIH.

Example of SYIH Used in a Text

SYIH
Help Us To Improve Cyber Definitions
Please tell us using this form.

G2H (Go To Hell) LHYW (Like Hell You Will) NWIH (No Way In Hell) THWU (To Hell With You) DMW (Dead Man Walking) OMDB (Over My Dead Body!)