G2H means "Go to Hell." The abbreviation GTH is an angry way to tell someone to leave you alone or stop talking to you. In some religions and in folklore, Hell is a place of purgatory and torment in the afterlife.

American Country singer Dolly Parton recorded a track entitled "Go To Hell" on her album "For God and Country," which was released in 2003, to mixed reviews.

When I write G2H, I mean this: 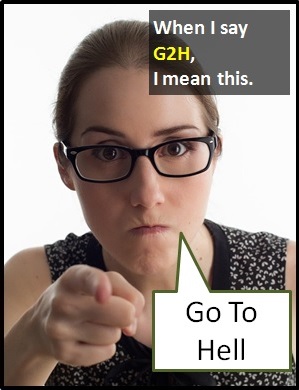 G2H is an angry way of telling someone to leave you alone.

Examples of G2H in Sentences

Here are examples of G2H being used in conversations:

An Academic Look at G2H

"Go To Hell" is an idiom that is typically used as an imperative (i.e., an order). It is an example of figurative language. Figurative language uses similes, metaphors, hyperbole, and personification to describe something, whereas literal language says exactly what it means.

The abbreviation G2H is classified as a cyber term as opposed to an initialism abbreviation or an acronym. Initially, cyber terms were introduced for brevity, but, particularly with the advent of predictive texting and on-screen keyboards, they are now mostly employed for fun.

Before the digital era, we might have said something like "Get lost!" or "Drop dead!" instead of using G2H.

Example of G2H Used in a Text

G2H
Help Us To Improve Cyber Definitions
Please tell us using this form.