What Does SXE Mean?

SXE means "Straightedge." The abbreviation SXE (usually typed or written sXe) is used with the meaning "Straightedge" to refer to people who consciously avoid indulging in things such as alcohol, tobacco, illegal drugs, or sex outside of marriage.

The term "Straightedge" was coined by 1980s punk band Minor Threat, who released a track blasting what they saw as the destructive culture of drinks, drugs and tobacco. Lead singer, Ian MacKaye, was teetotal and drug free. Since then, "Straightedge" has grown into an unofficial movement and represents a lifestyle choice for some young people. As well as the usual vices, some people consider themselves "Straightedge" because they avoid prescription medications, practice veganism or are atheist.

When I write SXE, I mean this: 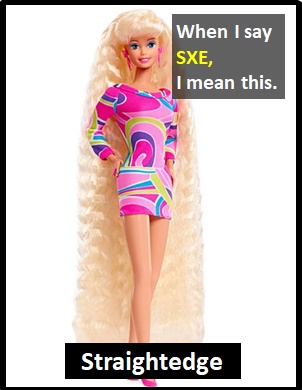 Here are examples of SXE being used in conversations:

An Academic Look at SXE

The letters "S" and "E" are a contraction of the word "Straightedge". They are separated by the letter "X," which indicates straight lines and emphasises "Straightness" or "Prohibition."

Before the digital era, we would have just said "Straightedge" instead of using the abbreviation SXE.

Example of SXE Used in a Text

SXE
Help Us To Improve Cyber Definitions
Please tell us using this form.

STR8 (Straight) BTOBS (Be There Or Be Square) BASIC (Boring)