SWYP means "So What's Your Point?".

The abbreviation SWYP is used with the meaning "So What's Your Point?" as a way of asking for clarification. It can sometimes come across as confrontational and indicate irritation on the part of the sender.

SWYP is similar in meaning to: In 2017, Etisalat launched a pre-paid mobile service with the name SWYP in the United Arab Emirates. SWYP contracts were only available to subscribers aged between 15-29 and offered special access to social media apps and other benefits of interest to young people.

When I write SWYP, I mean this: 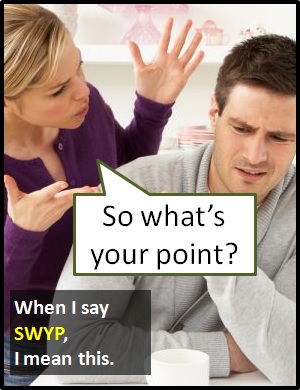 Examples of SWYP in Sentences

Here are examples of SWYP being used in conversations:

An Academic Look at SWYP

SWYP plays the role of an interrogative sentence (i.e., a question), but it is commonly seen without a question mark. In other words, it can be written "SWYP?" or "SWYP".

SWYP is an initialism abbreviation. Technically, this means it is pronounced using its individual letters (i.e.,Ess Dublyu Why Pee), but as this is harder to say than "So what's your point?," it is not often uttered using its letters. In other words, the abbreviation SWYP is for efficiency in writing and not efficiency in speech.

Before the digital era, we might have just said "So What's Your Point?", or something like "What are you getting at?", instead of using SWYP.

Example of SWYP Used in a Text

SWYP
Help Us To Improve Cyber Definitions
Please tell us using this form.

TTP (To The Point) WTP (What's The Point?) IDKWYM (I Don't Know What You Mean) WDTM (What Does That Mean?) WDUM (What Do You Mean?)