What Does STASHING Mean?

STASHING means "to hide a romantic interest from your friends and family." The act of STASHING a love interest has been happening for decades. The verb to STASH is a recent developement in internet slang.

Someone who is STASHING is reaping the many benefits of dating, but refusing to acknowledge their relationship to the world. A STASHER is either embarrassed of the relationship or they view their partner as temporary or replaceable.

When I write STASHING, I mean this: 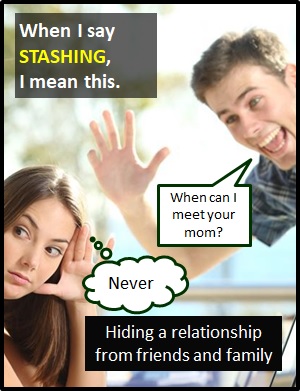 [A STASHER hides their relationship from their friends and family.]

Examples of STASHING in Sentences

Here are examples of STASHING being used in conversations:

An Academic Look at STASHING

STASHING is typically used as a verb (i.e. a doing word). For example:

(Here, STASHING is being used as a verb.)

Example of STASHING Used in a Text

STASHING
Help Us To Improve Cyber Definitions
Please tell us using this form.