What Does THIRSTY Mean?

THIRSTY means "Desperate For A Relationship."

When I write THIRSTY, I mean this: 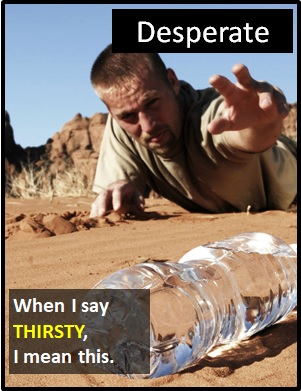 THIRSTY means "Desperate For A Relationship." This is the most common meaning for THIRSTY on online dating sites, such as Craigslist, Tinder, Zoosk and Match.com, as well as in texts and on chat forums.

The term THIRSTY is a form of lust of or want of members of the opposite sex. It can refer to both males and females.

Although the term has been in use since 2003, its popularity soared when it was used in a 2015 Diet Coke campaign. The tagline for the campaign was "Be ambitious, not thirsty. You’re on Diet Coke." The campaign cleverly uses THIRSTY to mean both "dehydrated" and "desperate." The term also gained traction with Soulja Boy's "She Thirsty" and Missy Elliot's "Ching-A-Ling."

Examples of THIRSTY in Sentences

Here are examples of THIRSTY being used in conversations:

An Academic Look at THIRSTY

THIRSTY is typically used as an adjective (i.e., a describing word). For example:

(Here, the adjective THIRSTY modifies she.)

Example of THIRSTY Used in a Text