What Does SIAS Mean?

The abbreviation SIAS is used with the meaning "Say It Ain't So," as in "Tell me it's not true" or "I don't believe it." The use of SIAS indicates that the sender hopes that what they have just been told is false, rather than actually believes that to be the case. SIAS is often used to express exasperation, surprise or anger, rather than genuine disbelief.

The phrase "Say It Ain't So" is thought to have originated in 1919, when the American baseball player "Shoeless" Joe Jackson was involved in a match fixing scandal. Legend has it that, as he left the courthouse, a young fan called out "Say It Ain't So, Joe." Jackson later admitted to the accusation.

When I write SIAS, I mean this: 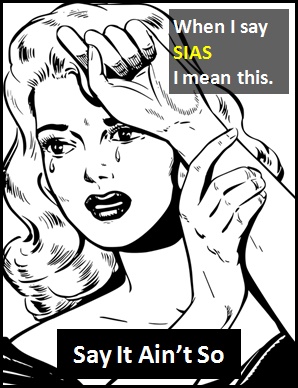 Examples of SIAS in Sentences

Here are examples of SIAS being used in conversations:

An Academic Look at SIAS

As it is pronounced using its individual letters (i.e., "Ess Eye Aye Ess"), SIAS is classified as an initialism abbreviation. Initialisms are different to acronyms, which are spoken like words.

SIAS is typically used as an imperative phrase (i.e., an order).

Before the digital era, we might have just said "Say It Ain't So," or something like "No! That Can't Be True!", instead of using the abbreviation SIAS.

Example of SIAS Used in a Text

SIAS
Help Us To Improve Cyber Definitions
Please tell us using this form.