What Does ROZZERS Mean?

ROZZERS means "Police." ROZZERS is a long-standing slang term for the police, which derives from the late 1800s. The term is highly likely to have been coined in the time of Sir Robert Peel, who established the first police force in the area of Rossendale, Lancashire (hence ROZZERS). Other slang terms for the police include:

When I write ROZZERS, I mean this: 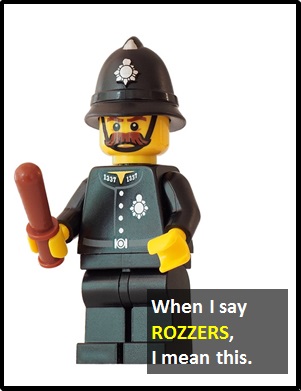 Examples of ROZZERS in Sentences

Here are examples of ROZZERS being used in conversations:

An Academic Look at ROZZERS

The word ROZZER is a contraction of Rossendale. ROZZER is typically used as a noun (i.e., a naming word). For example:

(Here, ROZZER is being used as a noun.)

Example of ROZZERS Used in a Text

ROZZERS
Help Us To Improve Cyber Definitions
Please tell us using this form.