What Does ROMCOM Mean?

ROMCOM means "Romantic Comedy." A ROMCOM is usually a film but it can be a play, where the plot line is light-hearted with a romantic thread. It always ends happily with love having conquered all.

When I write ROMCOM, I mean this: 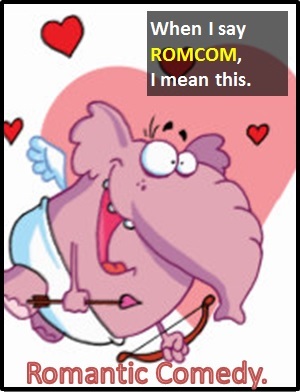 A ROMCOM is a romantic comedy (usually a film).

Examples of ROMCOM in Sentences

Here are examples of ROMCOM being used in conversations:

An Academic Look at ROMCOM

Before the digital era, we might have said something like "a funny love film" instead of ROMCOM.

Example of ROMCOM Used in a Text

ROMCOM
Help Us To Improve Cyber Definitions
Please tell us using this form.