What Does ROFL Mean?

When I write ROFL, I mean this: 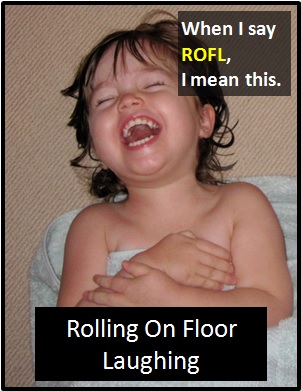 Examples of ROFL in Sentences

Here are examples of ROFL being used in conversations:

An Academic Look at ROFL

ROFL is an acronym (i.e., an abbreviation spoken like a word). Acronyms differ from initialism abbreviations, which are pronounced using their individual letters.

Example of ROFL Used in a Text

ROFL
Help Us To Improve Cyber Definitions
Please tell us using this form.