What Does PNP Mean?

PNP means "Party And Play" and "Plug and Play."

The abbreviation PNP is typically used on dating sites and in adult chat rooms with the meaning "Party And Play" (or "Party 'n' Play"). In this context, PNP refers to having sex while high on drugs (i.e., sex and drugs, without the rock 'n' roll).

The drug typically used in PNP is crystal meth. However, ecstasy and cocaine are also popular.

In the technical realm, PNP stands for "Plug And Play." In this context, PNP refers to devices that have a generic driver already included in most operating systems. This means the user shouldn't have to install separate drivers, but can simply connect the device ("plug" it in) and use it ("play" with it).

"Plug and Play" is another widely used definition for PNP.

When I write PNP, I mean this: 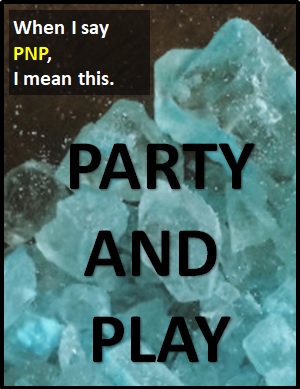 Examples of PNP in Sentences

Here are examples of PNP being used in conversations:

An Academic Look at PNP

As it is pronounced using its individual letters (i.e., "Pee Enn Pee"), PNP is classified as an initialism abbreviation. Initialisms are different to acronyms, which are spoken like words.

Example of PNP Used in a Text

PNP
Help Us To Improve Cyber Definitions
Please tell us using this form.