What Does PNL Mean?

PNL means "Peace And Love." The abbreviation PNL is a salutation, typically used as a way of saying goodbye at the end of a conversation.

The phrase "Peace And Love" is also abbreviated as P&L.

The saying "Peace And Love" is thought to have originated during the "Summer of Love," which occurred in the summer of 1967, when up to 100,000 (mostly young) people gathered in San Francisco for a "hippy" festival.

When I write PNL, I mean this: 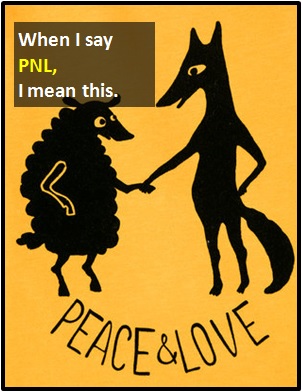 "We can all get along if we just share a little PNL."

Examples of PNL in Sentences

Here are examples of PNL being used in conversations:

An Academic Look at PNL

PNL is defined as a cyber term because the letter "n" is substituted for the sound of the word "and." Most cyber terms were introduced to reduce the number of key strokes required to write the phrase, but since the arrival of predictive texting and keyboards on mobile devices, this efficiency is no longer required. Nevertheless, cyber terms are still regularly used to make messages more entertaining or to express individuality. Cyber terms differ from icons because they are not pictorial representations.

Before the digital era, we would have just said "Peace And Love," instead of using the abbreviation PNL.

Example of PNL Used in a Text

PBWU (Peace Be With You) PEACE OUT (Goodbye) PLH (Peace, Love And Happiness) PLUR (Peace, Love, Unity, And Respect)