What Does P2W Mean?

Here is more information about each of these definitions of PTW, with examples of use.

P2W is used in gaming with the meaning "Pay to Win," to refer to games that allow players to purchase items or abilities (e.g., more powerful weapons, additional health points) that give them an advantage in the game, either over other players or NPCs (Non-Player Characters). For example: P2W is a very controversial aspect of gaming, especially in MP (Multiplayer) games. Many players strongly object to people being able to pay to trump their own hard-earned experience or superior skills.

P2W is widely used in sports, business, and gaming, with the meaning "Play To Win." In this context it indicates that a person or team takes the activity or endeavor seriously and intends to triumph. For example:

P2W is also used with the meaning "Professional Time Waster." In this context it refers to someone who is either dedicated to avoiding work, or needlessly wastes the time of other people (e.g., by requesting complicated quotations for a job when they have no real intention of contracting the service in question). For example: P2W is often typed as PTW.

When I write P2W, I mean this: 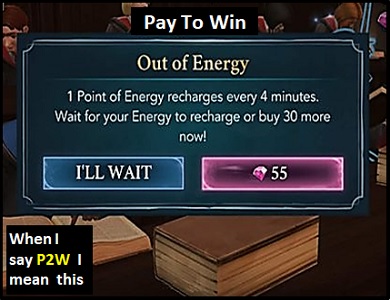 An Academic Look at P2W

Whether used with the meaning "Pay to Win," "Play To Win," or "Professional Time Waster," P2W is classified as a cyber term, because some of its characters are used as substitutes for letters.

Most cyber terms were introduced to reduce the number of key strokes required to type the word. However, since the arrival of predictive texting and keyboards on mobile devices, this efficiency is no longer required. Nevertheless, cyber terms are still regularly used to make messages more entertaining or to express individuality.

Cyber terms differ from emoticons because they are not pictorial representations.

Example of P2W Used in a Text