The word FROOB is an amalgam of "Free User" and "Newbie."

Often, when online gamers are introduced to a new game, they are given a free trial period to encourage them to play. During this period, the new player (i.e., the FROOB, Newbie, or NOOB) will not have a good understanding of the game's controls or tactics. As a result, the new player will often make basic mistakes. Therefore, FROOBS should be afforded some leniency as they cannot be expected to perform to the level of the more experienced players.

Of note, not everyone agrees on the words that compose FROOB. Here are two commonly cited alternative expansions:

When I write FROOB, I mean this: 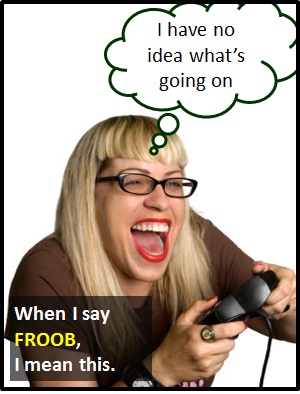 A FROOB is non-paying beginner (usually in the context of an online team game).

Examples of FROOB in Sentences

Here are some examples of FROOB being used in sentences:

An Academic Look at FROOB

The word FROOB is most often used as a noun.

As it is formed by merging two words into one, FROOB can be classified as a portmanteau word. It is formed by amalgamating Free and NOOB.

Example of FROOB Used in a Text

FROOB
Help Us To Improve Cyber Definitions
Please tell us using this form.