What Does N00B Mean?

N00B (with two zeros) is a version of NOOB (with two Os). Both terms are derived from NEWBIE, which means "Inexperienced or New Person."

N00B is used in chat forums and in the gaming community to describe a newcomer who has little or no previous experience. Unlike the term NEWBIE, which is typically used positively in recognition of someone's inexperience, N00B is typically used in a derogatory manner (i.e., as an insult), especially when talking about someone who acts in an arrogant, selfish or disrespectful way. 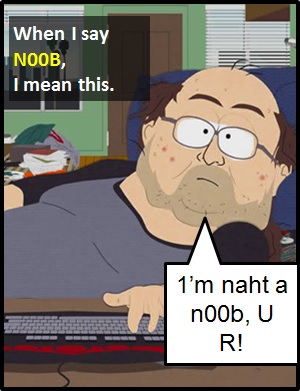 N00B is a deliberate misspelling of "NOOB."

"Inexperienced or New Person" is the most common definition for N00B on Snapchat, WhatsApp, Facebook, Twitter, and Instagram, and in gaming related chat on apps such as Discord, Mumble and TeamSpeak.

Examples of N00B in Sentences

Here's an example of N00B being used in conversation:

An Academic Look at NEWBIE

N00B is a noun (i.e., a naming word), derived from the portmanteau word NEWBIE. NEWBIE is formed by amalgamating the words new and either boy or a contraction of blood.

Both N00B and NEWBIE are slang words. Slang refers to words, phrases and uses of language that are regarded as very informal and which are often restricted to a special context or a particular group of users.

Before the digital era, we might have said something like "know-it-all" or "wise guy" instead of using N00B.

Example of N00B Used in a Text