What Does NHS Mean?

The National Health Service (NHS) is the publicly funded healthcare system for the United Kingdom. It was founded in 1948 by the Labour government following the passing of The National Health Service Act 1946 (which came into effect on 5 July 1948) and is the oldest and the largest publicly funded healthcare system in the world.

The NHS is funded through the general taxation system (with a small amount coming from National Insurance payments) providing healthcare to every legal resident in the United Kingdom, with most services free at the point of use. Anyone legitimately and fully registered with the system (i.e., being in possession of an NHS number), including UK citizens and legal immigrants, can access the full spectrum of critical and non-critical medical care without payment. Emergency treatment and treatment of infectious diseases are free for everyone, including visitors to the UK.

Private healthcare provision is available in parallel to the NHS, paid for largely by private insurance (similar to the model used in the US). However, it is used by only about 8% of the population, generally as an add-on to the standard NHS services.

When I write NHS, I mean this: 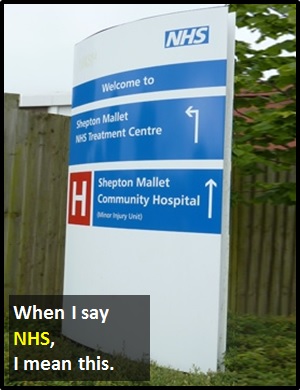 The NHS is a publicly funded healthcare system.

Examples of NHS in Sentences

Here is an example of NHS being used in a conversation:

An Academic Look at NHS

NHS is an initialism abbreviation. This means it is pronounced using its individual letters (i.e., En Aitch Ess). Initialisms contrast with acronyms, which are abbreviations spoken like words.

Example of NHS Used in a Text